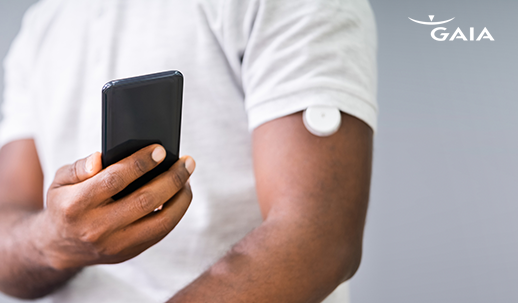 In this trial, GAIA combined its digital therapeutic software platform with smart sensors, including a sensorized shirt that collects biomedical data (e.g., respiration dynamics, electrocardiogram, body movement) and a predictive algorithm that forecasts the development of individual patients’ depressive symptoms. The goal of the system was to provide personalized feedback and easily accessible treatment options for patients with severe somatic conditions (e.g., cancer, myocardial infarction, and kidney failure), in which depression is often unrecognized and inadequately treated.

A large, multicenter, international randomized controlled trial (RCT) of this so-called NEVERMIND system has now shown its clinical effectiveness. A total of 425 patients were recruited in hospitals in Italy and Portugal. Statistically significant and clinically relevant intervention effects on the reduction of depressive symptoms were shown after 12 weeks and up to 24 weeks. Significant treatment effects were also shown for the reduction of suicidal ideation and the prevention of new depressive symptoms over time. The authors concluded that this combined system of digital therapeutic and smart sensors could improve the quality of depression treatment among patients with severe somatic conditions.

The project has not only been selected by the EU official „Success Story Yearbook“ as an example for cutting edge clinical research in the area of digital technologies, it also underlines the aspiration of the EU to provide top universities as well as pioneering R&D companies such as GAIA an environment for breakthrough innovations in the field of digital medicines, shaping the healthcare systems for the generations to come.

“NEVERMIND confirms the great potential of combining our clinically-proven and effective DTx platform with modern sensor technology to build next generation digital therapeutics”, says Mario Weiss, CEO and founder of GAIA.“ GAIA is proud and grateful to be a part of this successful European collaboration that was supported by the EU, which proved once again how our evidence-based digital therapeutics can help improve outcomes in patients with severe medical conditions.”

The article describing the study results will be published in a forthcoming issue of The Lancet eClinicalMedicine.